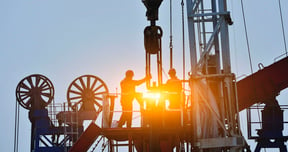 A gas that’s combustible is one that, when mixed with oxygen or air, will burn when ignited. Different mixtures of gas and air will burn at different concentrations and temperatures.

If combustible gases are a known or potential hazard in your workplace, it’s important to:

If you know you’ll need a flammable gas detector that you can count on, check out an article about the revolutionary NevadaNano Molecular Property Spectrometer sensor now featured in Blackline’s portfolio of gas detection solutions. You can also contact Blackline Safety to learn more about how it can elevate your gas detection program.

Three elements are needed for a substance to burn: 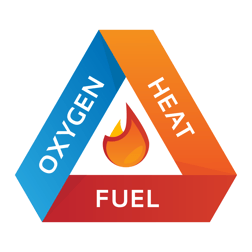 This is the fire triangle, and all three elements are required to ignite a gas. If any one of these three components is removed, then the potential for a fire or explosion is eliminated.

The fuel component is often an occupational hazard in industries that need a particular gas to perform work or that is present as a product or byproduct of production. In such environments, the risk of combustion can be mitigated by managing their uncontrolled or accidental release, the concentrations of oxygen and eliminating potential ignition sources.

Typically, for worker and facility protection, the focus should be on monitoring gas concentration and proximity toward the lower explosive limit (%LEL) of a worksite gas. If the percentage is at 100% LEL, enough of the fuel element is available for ignition to occur. It is crucial that workers are notified well before the concentration of the ambient gas reaches 100% LEL. Depending on the region, legislative jurisdiction and the company’s protocol, this could mean configuring personal gas detectors to alert the wearer when gas presence reaches a low LEL limit of 10%, and then warning them to evacuate if the concentration reaches a high LEL limit of 20%.

In general, combustible gases used in workplace settings fall into one of these three categories: 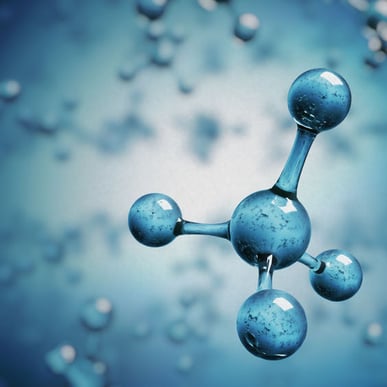 The Science Behind Hydrocarbon Gases

Hydrocarbon compounds account for the majority of combustible gas hazards in the workplace. These organic compounds consist only of carbon and hydrogen. When a hydrocarbon gas mixes with sufficient oxygen and high enough temperatures, the hydrocarbon bonds are destroyed. Extreme heat can be produced as the transformation breaks the compound down into carbon dioxide and water, creating a significant combustion hazard.

The Risk of Hydrogen Gas

A similar process happens when high temperatures are applied to hydrogen gas but, because there are no carbon atoms available, the reaction produces only water and heat. In contrast to methane, hydrogen has a very broad range of temperatures where it is combustible.

Be Aware of Other Combustible Gases

Other gases found in industrial workplaces can be quite toxic in addition to being combustible at certain concentrations. Hydrogen sulphide (H2S), for example, is considered an immediate threat to life as soon as it reaches 100 parts per million (ppm), but becomes combustible at 40,000 ppm. This means that the gas is toxic long before the danger of explosion exists. Often coupled in a device with a combustible gas sensor, a dedicated H2S gas sensor provides advanced warning to users when toxicity levels are of low concentration and threaten the user’s wellbeing. A low alert threshold is often set to 10 ppm while a high-gas alert occurs at 20 ppm.

One combustible gas doesn’t necessarily react the same as another one. Here are four factors that impact their reactions. 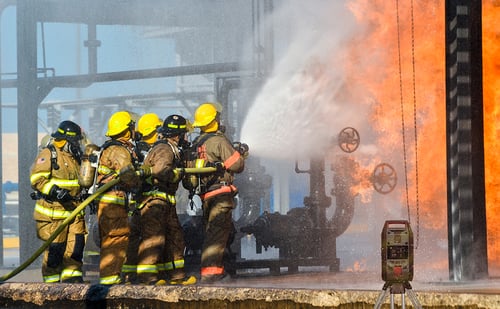 The flashpoint of a liquid substance is the lowest temperature at which enough vapor is produced in the air to have the potential of combusting if exposed to a flame or ignition source. However, substances that remain in a gas form at common environmental temperatures do not have a flash point. Pentane has a flash point of -49ºC so it will be a gas at room temperature and atmospheric pressure.

Those that tend to fall include:

Knowing how a gas responds because of its relative vapor density can help determine where to place gas monitoring systems. Ones with a metric of more than 1.0 can settle within confined spaces more easily, which can make higher gas concentrations (and resulting combustions) more likely.

How to Monitor Combustible Gases

Combustible gas detector systems play a crucial role in protecting workforces by providing alerts of combustible gases in the area. Systems should:

This system is often a company’s first line of defense. Fixed gas detection monitors are placed in areas where known gas hazards exist. These systems operate on an ongoing basis, in communication with other facility systems. The goals are to provide early warning about a possible gas release, trigger the shutdown of relevant equipment and initiate the safe evacuation of workers. Fixed gas detection is installed at individual points in a facility, so they do not provide universal monitoring of the conditions everywhere.There are some worksites that use “temporary” area monitors as more permanent solutions due to their multi-gas capabilities and other options that give added flexibility. 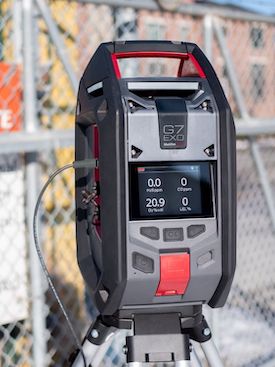 Sometimes, fixed gas detection systems aren’t practical, such as around tank farms, or they must be disabled for maintenance projects. In those cases, area monitors can be deployed in a semi-fixed fashion to provide early warning of a gas-related event. Area monitors can also be used in temporary situations or when an additional layer of monitoring is deemed to be necessary such as in confined spaces, along fence lines and perimeters, construction sites, remote sites and more. They can also be used in emergency situations, such as during a fire and hazmat response, to indicate and monitor safe zones and track gas plume movements. 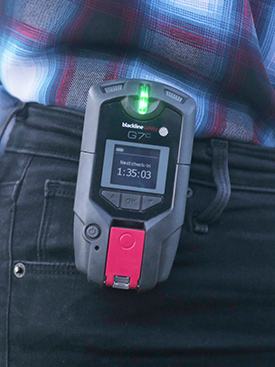 Wearable, wireless gas detectors are the most important line of defense for individuals. Personal devices monitor the air they’re being directly exposed to and should be worn in proximity to the user’s breathing zone. Companies set predefined limits for each gas type that is a risk with combustible gas sensor limits commonly set at 10% and 20% LEL for low and high-gas alarms — well below the explosive danger of the 100% LEL concentration. If a low or high-gas alarm level is reached, the device will warn the worker in real-time so he or she can safely evacuate the area and teams can review the situation.

If a sensor fails, depending on the technology type, it will fail in one of two ways — fail-to-safe or fail-to-unsafe. The difference is crucial. With the first, the sensor alerts users that it is no longer operating correctly. With the second, the sensor doesn’t alert the user and it will read 0% LEL, providing false confidence to its user that all is well and that they are continuing to be protected.

This is the purpose of daily bump tests — to ensure that sensors that read zero under normal circumstances are proven to operate when exposed to a known concentration of gas. Fortunately, new Molecular Property Spectrometer (MPS) technology that we introduce below, is available for combustible gas sensors that increases confidence after a bump test that a worker can safely monitor for flammable gases. Gas detectors that are fail-to-safe provide the highest level of protection and the best chance of getting that worker home safe after their shift.

Often, companies must prove that employees are using devices regularly and that the gas monitors have been bump tested and calibrated according to predetermined intervals as per regulatory guidelines such as those enforced by OSHA and NIOSH.

There are three types of sensors in use today that monitor and measure the lower explosive limit (LEL) of combustible gases:

The catalytic combustion meter was invented in the 1920s. Pellistor sensors use controlled combustion to detect and measure a variety of flammable gases. The sensors contain two platinum coils each embedded in separate ceramic beads. The first bead is coated with a catalyst to promote oxidation when exposed to flammable gases so that it ignites earlier than normal. The second bead is treated to discourage catalytic oxidation, and acts as a reference. The first bead allows for the combustion of a very small amount of flammable gas — generating heat and changing the resistance of the platinum coil. The resistance change is proportional to the amount of flammable gas present in an environment and is translated into an LEL% reading on the detector’s screen.

Pellistor sensors do have a few downfalls though. Due to the need to constantly heat the beads, they are very power hungry and drain power much faster than the alternatives. They are also very susceptible to poisoning where exposure to vapors from common industrial cleaners and lubricants (e.g. WD-40) can permanently damage the sensor. And since they are calibrated to a target gas, typically methane, they struggle to accurately measure exposure to other hydrocarbons they may come in contact with.

Invented in the 1970s, this technology uses infrared light, shined through a hydrocarbon gas at a particular wavelength. Infrared (IR) sensors (sometimes referred to as optical sensors, or non-dispersive infrared/NDIR) detect the presence of flammable gases by precisely measuring the absorption of infrared light at specific frequencies by various hydrocarbon molecules. Inside the sensor, an infrared emitter passes light through two paths. One path is used to measure the absorption of light by gases, the other is used as a reference. Light detectors on both paths allow the LEL sensor to measure the amount of flammable or combustible gases present by comparing how much light is absorbed in each path. NDIR sensors share the same issue seen in catalytic bead sensors in that they only accurately read the gas they were calibrated for rather than the potential range of explosives the wearer may come into contact with. 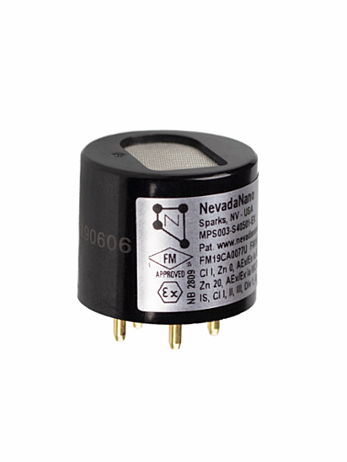 Launched in 2020, this new technology uses an advanced sensor to analyze a gas, using gas-specific properties to appropriately classify the gas or gas mixture into one of six categories – hydrogen, hydrogen-containing mixtures, or natural gas, and light, medium or heavy gases/mixtures. This sensor technology provides accurate combustible gas readings for its expected lifetime of over five years with a factory calibration.

MPS Sensor: The First Flammable Gas Detector You Can Truly Count On

Blackline Safety and NevadaNano have collaborated to bring your company the next generation of combustible gas detectors. Combining the G7 gas detector and MPS TM Flammable Gas Sensor provides unprecedented reliability and unquestionable accuracy, so teams can work confidently knowing that their environments are truly safe.

This is the first major combustible gas detector innovation in four decades and its transformational features and benefits will change the way businesses monitor risk environments in ground-breaking ways.

This G7 multi-gas detector provides highly accurate, simultaneous monitoring for a dozen of the most common flammable gases, without the need to calibrate to a specific gas or use correction factors. These include:

This cutting-edge technology will seamlessly integrate into your current gas detection safety program, quickly and easily providing unprecedented safety monitoring for your teams and ground-breaking efficiency for your company.

The data from the MPS sensor is communicated to the Blackline Safety Cloud for automated reporting and visualization. This information enables businesses, for example, to detect the presence of hydrogen in one area of their process where it was not present in previous measurements.

Gas and gas mixture classifications include:

CONNECT WITH BLACKLINE SAFETY FOR YOUR COMBUSTIBLE GAS DETECTION NEEDS

We specialize in helping companies respond to toxic and combustible gas emergencies in real time, with worker safety at the forefront. Our vision is to transform the industrial workplace through connected safety technology to ensure every worker has the confidence to get the job done and return home safe.

Shutdowns and Turnarounds: Four Key Considerations For Your Organization

Shutdowns and turnarounds are a necessity for oil and gas refineries and petrochemical plants to conduct maintenance, repairs, refittings and...
Back to all blog posts
Subscribe to Blog